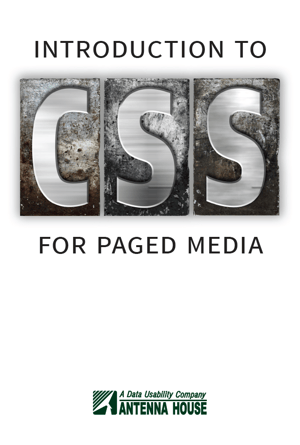 Introduction to CSS for Paged Media

CSS (Cascading Style Sheets) is a type of style sheet which can be used for not only Web designs, but also a variety of printing uses and page media such as PDF. This introduction guide will explain CSS Paged Media formatting based on Antenna House Formatter, which implements CSS3.

➥ HTML+CSS zip — As this document specifies CSS3 for layout, it cannot be rendered completely by any browser. Please download AH Formatter for rendering.

CSS is a stylesheet language that is used to set the look and feel of documents you write in HTML, XHTML and XML. When you use AH Formatter, you’ll have access to the 3 levels of style information available for the CSS stylesheet used:

When CSS is used for paged media formatting, Web and print documents are created from a single XML or HTML document. The requirements for CSS has evolved over the years and we are continuously adding new CSS features to AH Formatter.

AH Formatter V7 has improved CSS support and added new output options. Our compliance efforts allow you to use AH Formatter to support documents using CSS2.1 and CSS3 — the CSS3 page model support has expanded to high-quality CSS formatting options as they become available.
Thanks to an enormous set of supported extensions, every aspect of your document can be controlled with the smart CSS table formatting in AH Formatter V7.

The latest release of AH Formatter V7 currently meets the requirements of the new CSS3 specifications, so if your company plans to start using CSS for print or is considering transitioning your print media to CSS, we’ve got you covered.

The Japanese Layout Task Force (JLTF) is developing a document about requirements for Japanese layout formatted by CSS and XSL-FO. One of the objectives of AH Formatter is to satisfy the requirements in the future.