AH Formatter MathML Option is for the Lite version only. The MathML drawing feature is now a standard part of the standard version of AH Formatter.

Since the GUI is a Windows GDI, a print output of the same result is also possible. The formatted result can be outputted as a PDF file.

Example of formatted result as displayed by Antenna House GUI: 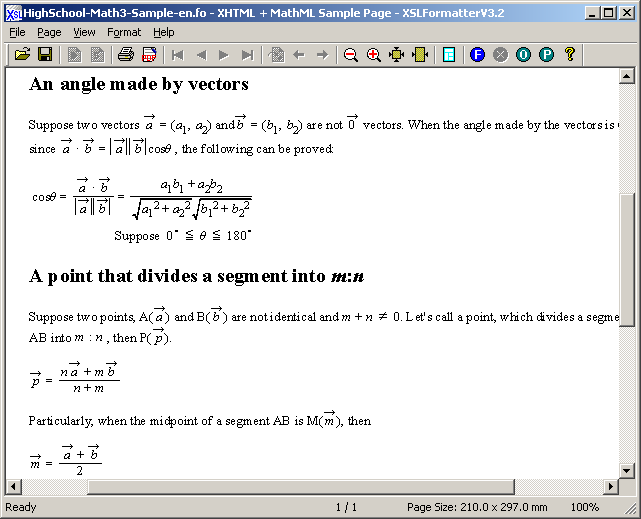 By using Formatter, it's possible to produce high quality mathematical expressions in PDF via vector data by embedding the equations in XSL-FO. MathML makes it possible to respond to the needs of creating a science and technology publication with XML.

MathML both for Web and PDF

If the source of a document is XML and the math expressions are marked up with MathML, the same source for the document can be formatted for both web and print using XSLT.

By transforming the XML + MathML into HTML + MathML, the math expression can be displayed on the Web using Netscape or Internet Explorer + Math Player.

By transforming the XML + MathML into XSL-FO + MathML, the math expression can be outputted to PDF or printer.

MathML is treated as a vector image. XSL-FO V1.0 specification only permits embedding foreign object via fo:instream-foreign-object and fo:external-graphic.

When using fo:external-graphic to place the equation, the external MathML file should be described as the src attribute.

AH Formatter MathML Option can be purchased directly from Antenna House or through one of our Resellers.

You can receive maintenance support of MathML Option as long as the AH Formatter maintenance period is active or during the 90 day warranty period from the purchase of AH Formatter.